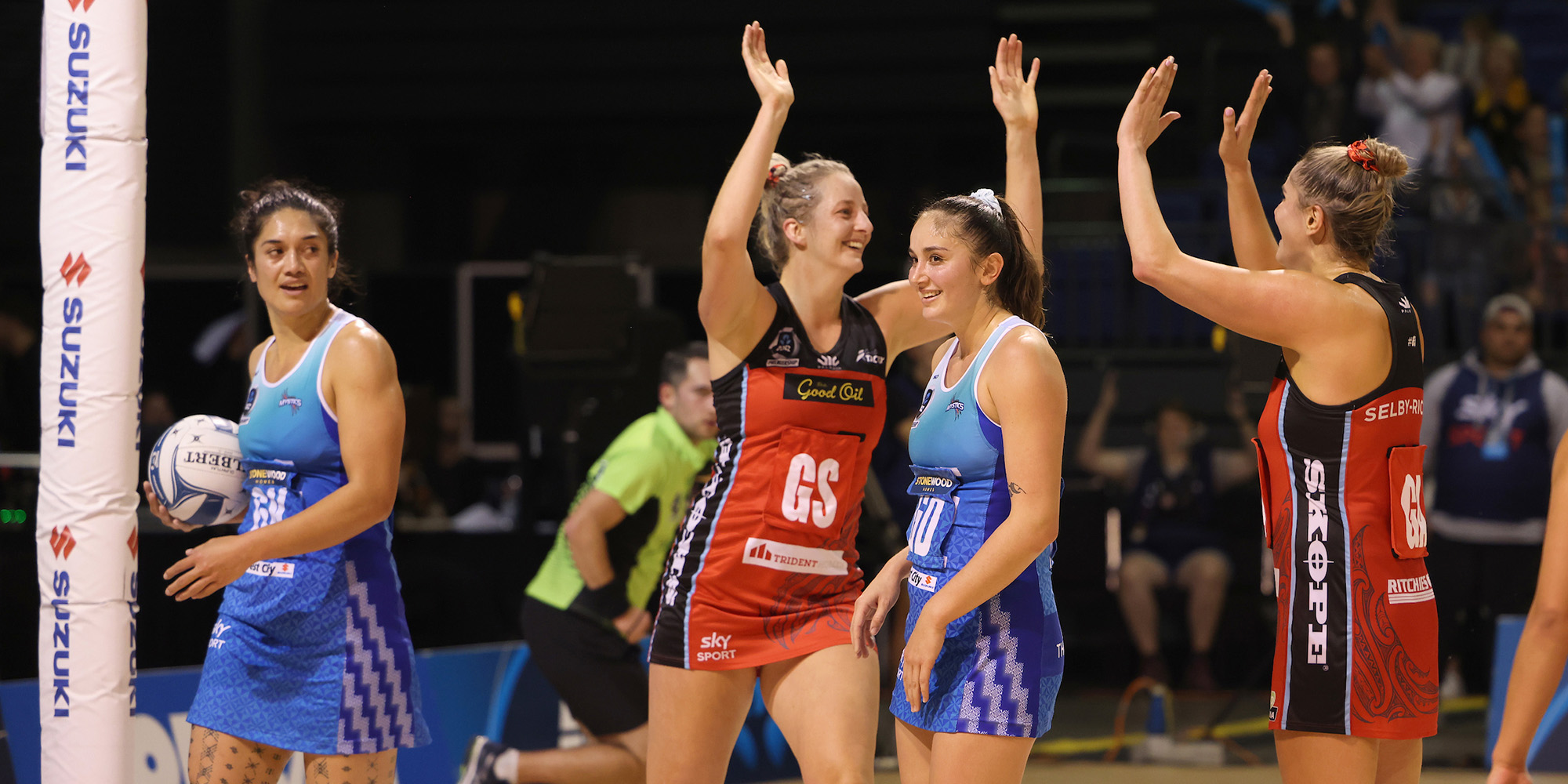 In an extra-time cliffhanger that went down to the final seconds, The Good Oil Tactix reversed their one-goal loss to the Northern Mystics a fortnight ago and pulled off a 64-63 victory at Christchurch Arena.

The emotional weight of the Heritage Round added to the intensity of the match, that was dominated by a battle of the towering goal shoots.

Mystics goal shoot Grace Nweke shot an incredible 59 from 64 attempts, while her Tactix opposite, Ellie Bird, potted 44 from 53, including the buzzer beater from long range that took the game into extra time.

The Tactix went hard and went early against the Mystics’ threat, and they were clinical and clean in their approach.

From the get-go, Selby-Rickit’s game was on-song – from the goal attack’s feeding to Ellie Bird, to her superb long shots. She proved she’s returning to the form she’s renowned for, not only in her shooting and feeding game, but also rallying the Tactix attack.

On defence, Jane Watson and Karin Burger forced the Mystics to put bigger passes into their shooting weapon, Grace Nweke, and they initially struggled to get the weight of those lobs right.  The Tactix had a lead of four at times during the quarter, and were up 17-14 at the first break.

Within minutes back on court, the Mystics drew even, finally making their connections stick, and rushed out to four ahead of the Tactix through determined defence led by captain Sulu Fitzpatrick (who ended up as the match MVP). Although goal attack Bailey Mes put up few shots, she was active all around the court.

Just when it looked like the visitors had stolen a march on the home side, the Tactix got back into their groove, with smarter defence of the long shots to Nweke, forcing the Mystics attack to make unnecessary mistakes.

And at the other end Selby-Rickit continued to land her long-range attempts, and the Tactix took back the lead; Watson’s intercept with a few seconds left on the clock ensuring they took that advantage into halftime, 29-28 ahead.

The atmosphere intensified in the third quarter, and it was the Mystics who couldn’t put a foot wrong.

Although it was goal for goal in the early stages, heavy defensive pressure from the Northerners forced a turnover that would put them in front and see them build their lead through the 15 minutes.

Led by Fitzpatrick’s defence on Bird, the Mystics scored five in a row giving them a 47-43 lead going into the final quarter. Peta Toeava’s exceptional no-look passing was another factor in the Mystics’ dominance of the spell.

The Tactix hadn’t given up at five goals down, and Watson and Burger forced some misplaced passes into Nweke. Leadership in the midcourt from Kimiora Poi, whose feeding was slick, closed the gap to two.

An intercept from Mes made sure the Mystics led 61-60 after the first stretch, but the Tactix broke back when Mes broke on the Mystic’s centre pass. And a Selby-Rickit goal with seconds remaining sealed the deal for the home side, giving them back-to-back victories.