Tactix finish with a flourish to beat Pulse 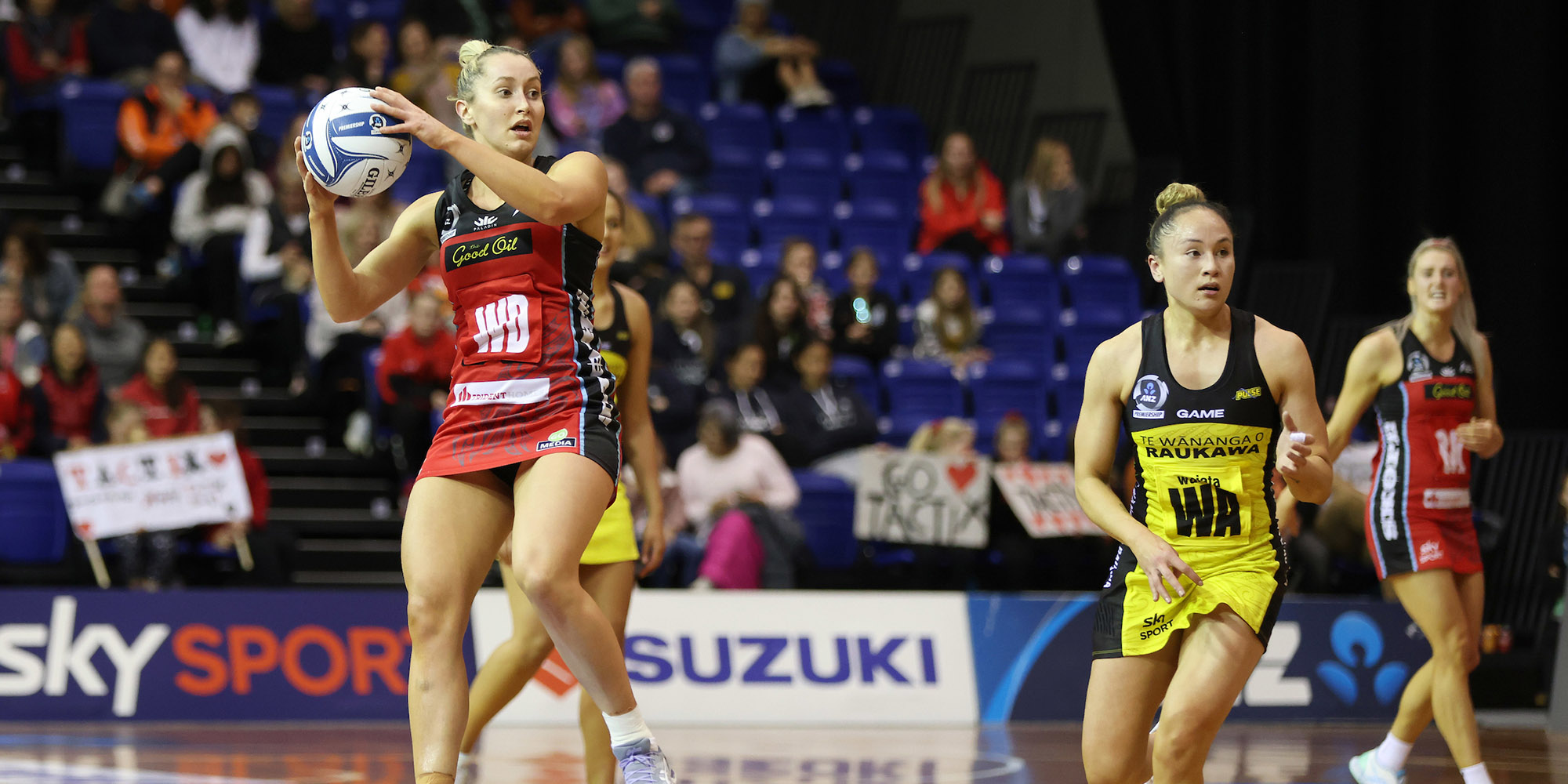 Coming home strongly in the second half, The Good Oil Tactix kept their Finals Series hopes alive following a 47-34 win over Te Wānanga o Raukawa Pulse in a bruising encounter in Nelson on Sunday.

Playing their first competitive matches in two weeks after the change to the Covid-19 Alert Levels in Wellington caused the postponement of the June 27 clash between the pair, resulted in a mixed outing when they resumed action.

With plenty on the line in this match, it was the Tactix who emerged from the enforced lay-off with the more decisive showing. With the game in the balance at halftime, big game players Jane Watson and Karin Burger were shining lights when it mattered, the Tactix pushing home strongly with a forceful result.

The numbers told the story with the Tactix controlling the bulk of possession to have 63 attempts at goal compared to the Pulse’s 39, the visitors also failing to make full use of their turnover opportunities.

There were no surprises in the Tactix line-up but the Pulse were missing their most experienced in-circle defender in Kelly Jury, who was forced out with a calf strain. Getting a first start at this level, her place at goal defence was taken by the teenaged Parris Mason.

It was a high tempo start by both sides, swarming Tactix defence in the Pulse attacking third creating turnover opportunities for the home side which they made count when skipping out to a handy buffer.

Under the pump, the Pulse fell behind early and were left scrambling and playing catch-up, the Tactix enjoying a seamless path to goal where Te Paea Selby-Rickit was prominent with her off-loading skills.

With Charlotte Elley picking off intercept ball and a composed and efficient front line, the Tactix rocked out to a six-goal advantage. The Pulse were quick to inject goal attack Ivana Rowland into the match for Te Amo Amaru-Tibble, the visitors scoring the last three goals to give the Tactix a 14-10 lead at the first break.

Paris Lokotui took over from Mason on the resumption, but it was the Tactix out of the blocks quickest to convert the first three goals. It was hard work for the Pulse on attack but their patience and grit paid off when they replied with five unanswered goals to get right back into the contest.

Captain Claire Kersten at centre and wing defence Maddy Gordon were prominent figures for the Pulse in putting the squeeze on the Tactix attacking momentum while Lokotui kept Selby-Rickit quiet, helping their side level the scores late in the piece.

Erikana Pedersen was injected for Samon Nathan at wing attack for the Tactix, who finished strongly to regain the initiative when taking a 23-20 lead into halftime after a low-scoring 15 minutes.

With so much resting on the outcome, both teams showed their desperation as fortunes swung back and forth during in an untidy third quarter. Neither was able to find much flow or attacking momentum until the latter stages when a Tactix surge gave the home side the upper hand.

With key Pulse shooter Aliyah Dunn double-marked by the menacing defensive duo of Burger and Watson, Rowland provided staunch support in the most challenging of situations, admirably.

But the Pulse failed to get enough ball into their shooters, the work of the ever-present Elley and Kimiora Poi helping keep the Tactix on the front foot as they headed to the last turn with a flourish.

A five-goal run put the Tacix in the box seat when they held a 35-28 lead at three-quarter time.