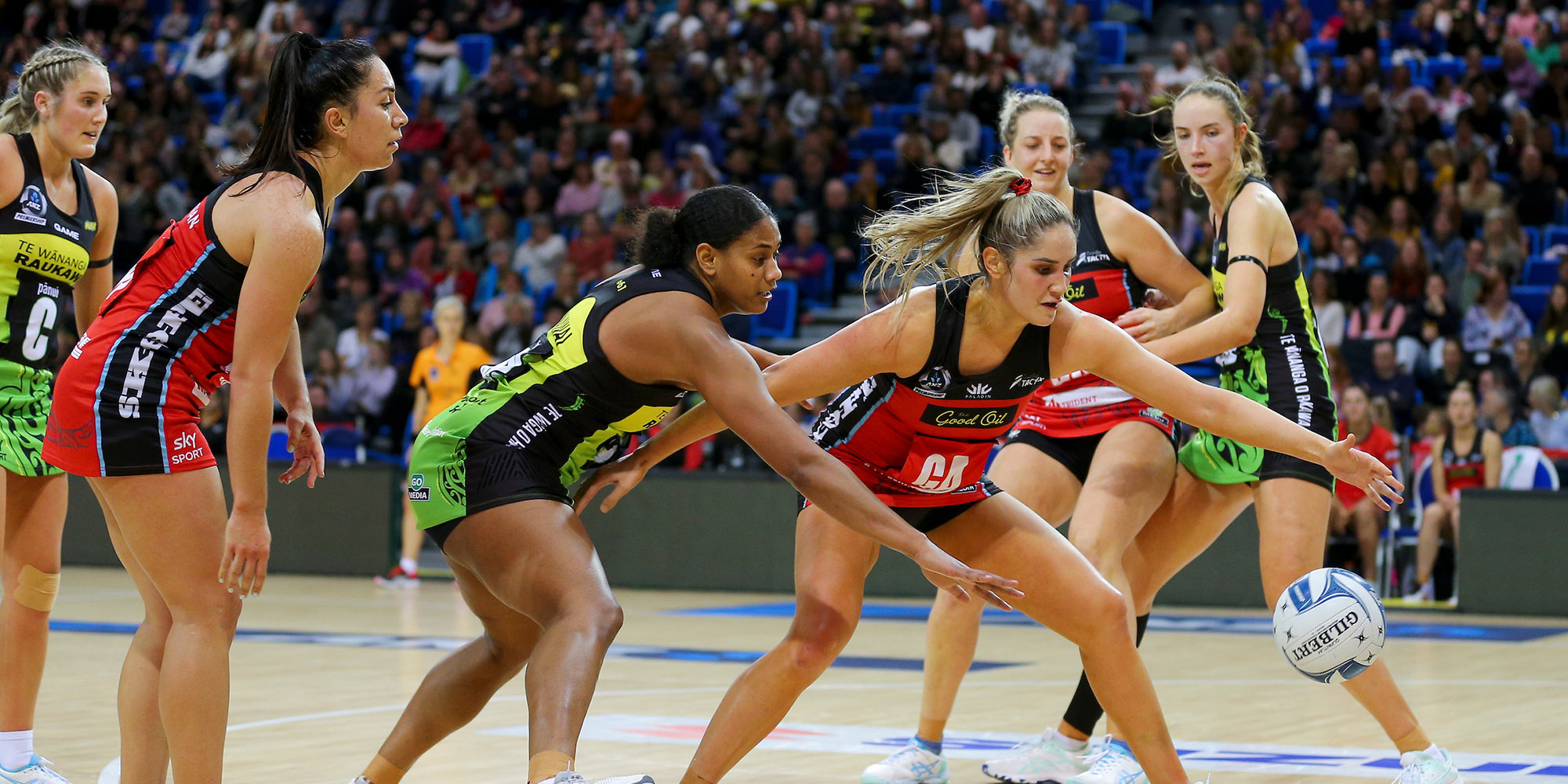 The Good Oil Tactix have kept their ANZ Premiership play-off hopes alive but they needed to use every tool in their kit to net maximum points against a determined Te Wānanga o Raukawa Pulse.

With every game now a must-win for the Mainlanders, they were forced to dig deep for a 52-49 victory at Te Rauparaha Arena in Porirua in the rescheduled Round 11 match.

Thirteen goals separated the teams when they met five days earlier but a dogged Pulse team wanted to celebrate captain Claire Kersten’s birthday in style and came close to snatching their first win off the Tactix this season – a held ball in the last two minutes of play giving the visitors the edge they needed to claim victory.

A spot in the play-offs may have eluded the Pulse this year but they came to play, back in front of their home crowd after four weeks on the road, and after forcing an early error from the Tactix raced out to a 3-0 lead.

The long reach of Kelly Jury, who missed last week’s game through a calf niggle, troubled the Tactix shooters early on while defender Kelera Nawai went hunting for ball.

It was a focussed Pulse unit which jumped out to a five-goal advantage but the Tactix weathered the early assault, settling into a good rhythm, and clawed the score back to trail 12-14 by the first break.

They wasted little time to find their groove on the resumption of play, taking less than two minutes to hit the lead with the defensive unit of Jane Watson and Karin Burger picking up valuable ball.

Tactix shooter Ellie Bird positioned herself well in the circle, giving plenty of space for Samon Nathan who, continuing her fine season in the wing attack bib, went for the direct route with her feeds.

Another strong surge from the Pulse was again well managed by the Tactix with the scores locked at 23-23 with just five minutes left in the spell.

A blood call late in the half forced a number of personnel changes and with three minutes on the clock just one goal separated the teams, the Pulse eventually going into the main break leading 28-27.

The hosts will have headed into the changing rooms knowing they needed to produce the goods in the second half following a poor third and fourth quarter last week which proved costly.

Coach Gail Parata opted to juggle her midcourt for the third stanza with Maddy Gordon moving to centre and Kersten into defence while the Tactix also made a change in the middle with Sophia Fenwick coming on at wing defence.

The Tactix showed plenty of patience on attack, waiting for the spaces to open up in the shooting circle and Bird finished well, ending the game with 41 goals from 44 attempts.

Pulse goal attack Te Amo Amaru-Tibble made way for Ivana Rowland five minutes into the third quarter as the teams went goal-for-goal, the full house at Te Rauparaha Arena waiting to see which side would blink first.

It was the Tactix to land the blow with less than 60 seconds in the third quarter and they went into the last 15 minutes of the game with a slender 40-38 lead.

The Pulse’s midcourt shuffle lasted just one quarter with Gordon and Kersten resuming their starting spots for the deciding spell, while Amaru-Tibble also returned to the fray.

Further changes on defence seemed to spark the Pulse to life as they gave one last push – bringing the crowd to life in what proved to be a tense finish.