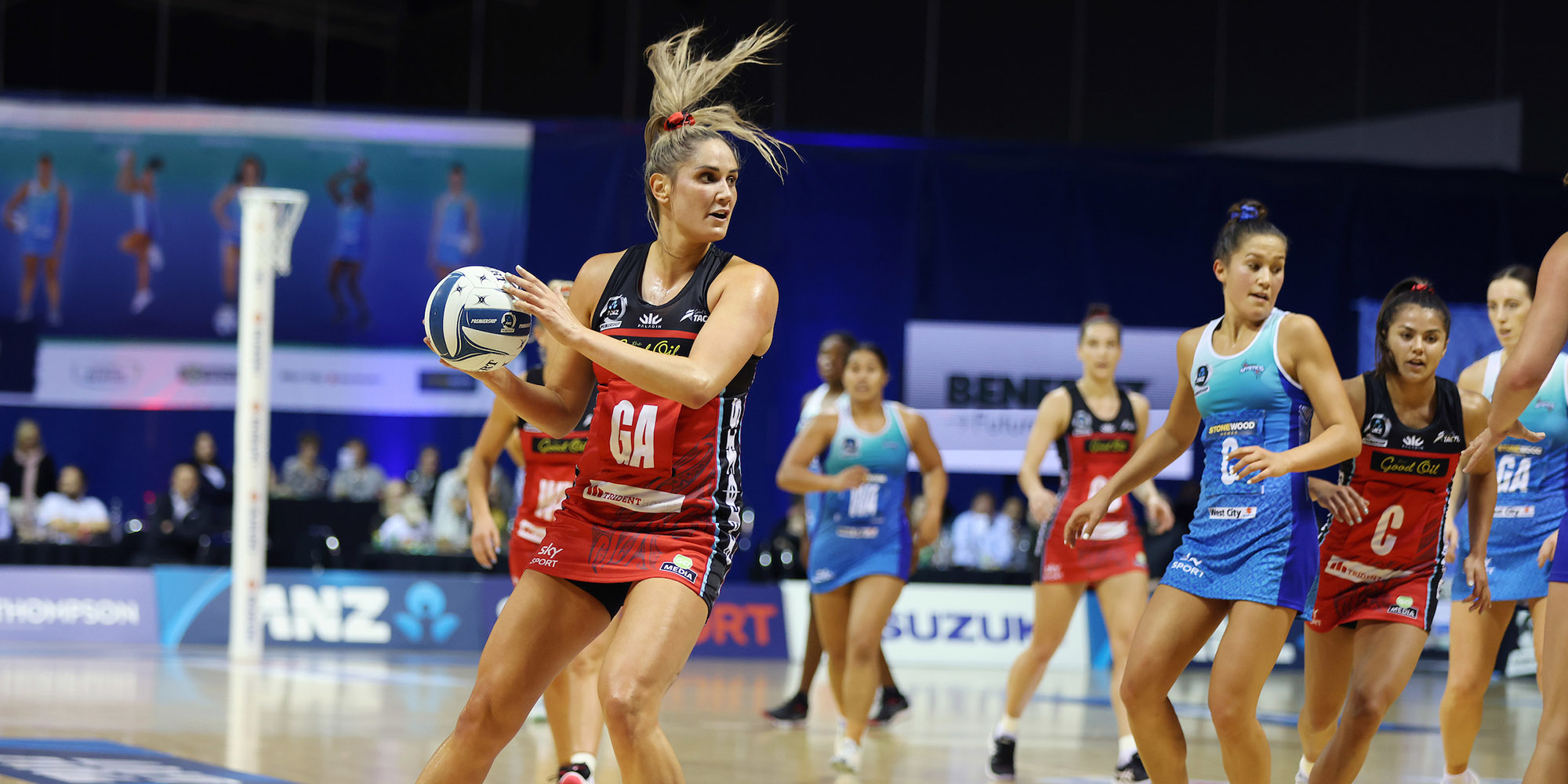 The Good Oil Tactix have netted their first points on the ANZ Premiership and with it shown plenty of positive signs ahead of their first home game of the 2021 season.

They went down 52-53 against the Mystics at Trusts Arena in Auckland on Monday night in their best performance to date, earning a bonus point in the process.

The Tactix slashed their error rates and showed plenty of fight in coming back from a slow start to almost push the game into extra time.

Captain Jane Watson said it was good to see the improvements across the court but they needed to address their starts to avoid having to play “catch-up” netball.

“We’ve got some points on the board so it’s onwards and upwards from here,” she said looking forward to their first home game against the Magic on Sunday, 9 May.

Watson said it was also nice to see Te Paea Selby-Rickit back on court with the goal attack slipping back into the front line with ease.

“I think she enjoyed being back and it was nice seeing her being a bit of a ball-hog,” she said.

The return of Selby-Rickit from a pre-season ankle injury, entering the game in the second quarter, helped the Tactix attack. Although she was only expected to play 30 minutes, she lasted 45 and ensured the Tactix won their first quarter of the season, and notched up their first point.

The Mystics had the measure of the Tactix in the first quarter, led by captain Sulu Fitzpatrick from the back, putting pressure on shooters Ellie Bird and Jess Prosser.

At the other end, Grace Nweke held her ground up against two of the world’s best defenders, Jane Watson and Karin Burger, and the home side had a 5-1 advantage which quickly grew out to a six-goal difference.

Peta Toeava was in everything on attack and defence, and the Mystics had a handsome 16-9 difference at quarter time.

But the introduction of Selby-Rickit brought a new energy to the Tactix.  Although her shooting was rusty, her court craft was invaluable to the Tactix, involved in almost every second pass in their attack.

A full-court effort from the Tactix pushed Mystics midcourt into multiple mistakes, and the visitors capitalised; the defence of midcourters Kimiora Poi and Charlotte Elley standing out.

Selby-Rickit’s presence opened up the Tactix shooting circle and they managed to draw even, but couldn’t pull in front, down 27-25 at halftime.

It was however the first time the Tactix won a quarter in this year’s league, and they did so convincingly 14-9.

The Tactix continued the momentum after the break, and still forcing mistakes in the Mystics midcourt, they were able to draw level again.

The contesting for the ball from both sides was fierce, and with the Mystics up by three, the umpires stopped the game and called both captains in to warn them of borderline intentional infringing.

Fitzpatrick and Kate Burley took back control of the defensive circle and suddenly the Mystics’ lead was back out to five.  Then Watson and Burger responded at the other end, and the gap reduced to two again, 39-37, going into the final spell.

The Mystics made a big change – replacing Burley with Ama Agbeze at goal keep. They pulled away to five with 10 minutes left in the match.

When Erikana Pedersen left the court with an injury, and Samon Nathan replaced her at wing attack, the Tactix didn’t miss a beat, again closing to two.

With one and a half minutes left on the clock, a wayward pass by Agbeze allowed the Tactix back in and they drew level 52-52 with 16 seconds to play. One more centre pass to the Mystics, and Toeava’s practiced bomb into Nweke paid off.