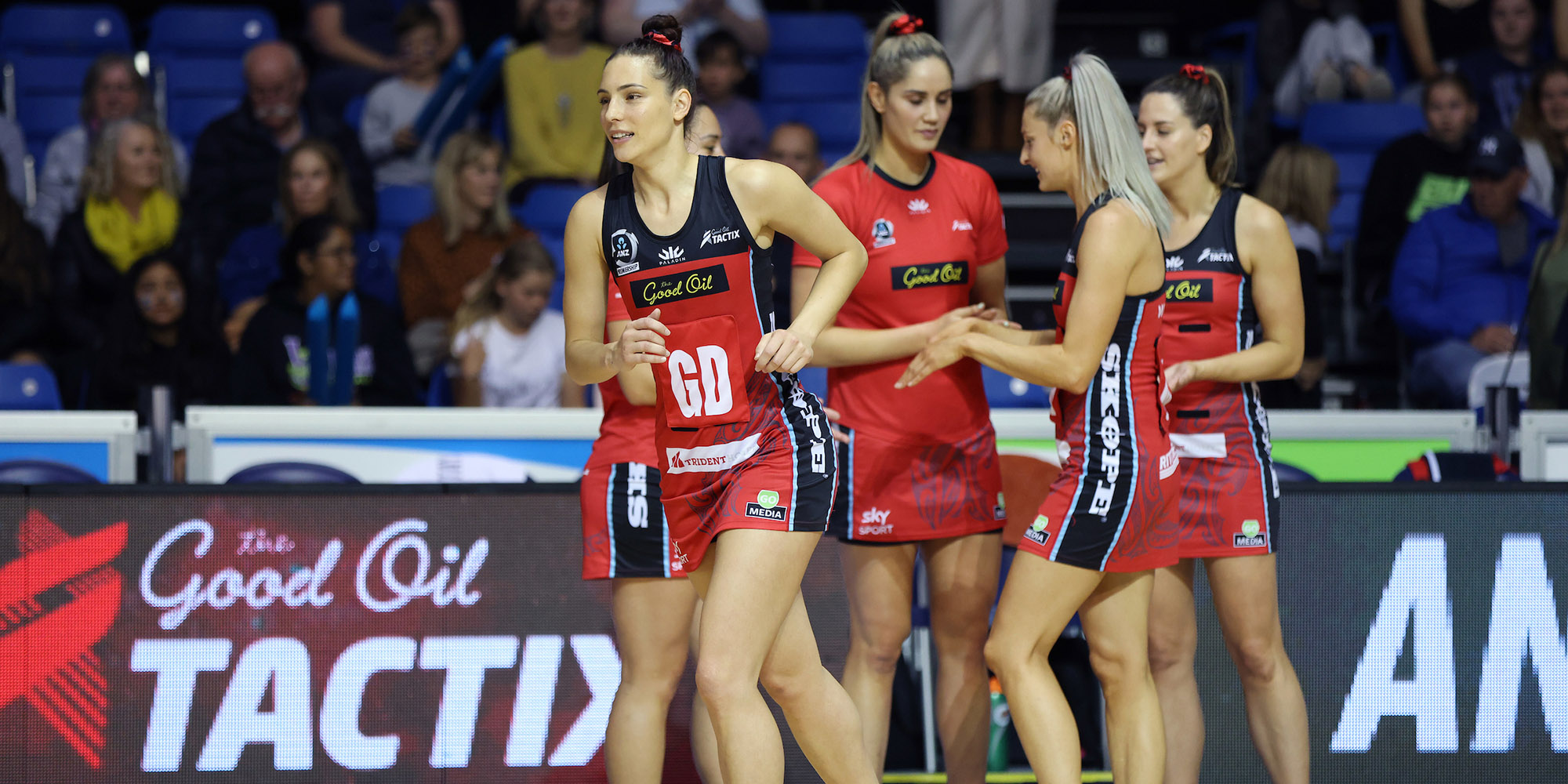 The Good Oil Tactix defender Karin Burger expects the “banter” with former team-mates to be dialled up this week as she prepares to take on her old team in a crunch ANZ Premiership match.

Just one point separates the Tactix and Burger’s former team, Te Wānanga o Raukawa Pulse, and Saturday’s game at Christchurch Arena has plenty on the line as the screws begin to tighten in the race for a top three spot.

Burger, who moved from the Pulse this year to join the Tactix, said her focus was solely red-and-black.

“After that extra-time result against the Stars, the only thing I’m thinking about is how the Tactix get the job done this week,” she said reflecting on the nail-biting one goal loss to the Stars in Round 7.

It started with individual analysis of the extra-time game – a part of the job that Burger has become familiar with and believes is a big part in a team’s growth.

“What you feel you’re doing out on court can actually be a lot different when you see the footage,” she said.  “It can be hard scrutinising your own game but as an athlete you are competitive and you are always trying to get better, so seeing that footage is a really important part of that.”

It has also been a key tool for Burger having slid across from the wing defence role to goal defence this year – the first time she’s had the opportunity to move into the circle since stepping up into the ANZ Premiership from the former Beko Netball League.

It has taken some adjustment and the Silver Fern defender admits she still has plenty of analysis to do when it comes to the new position, and working alongside Tactix captain Jane Watson.

“I think we’ve been working really well as a unit,” she said.

“Jane’s a very instinctive player and we’re definitely learning off each other.  There’s a lot of talk out there but I feel like there is that improvement every time we play.”

She hopes they can continue that in Christchurch on Saturday and is pleased they’ll get the chance to not only play the Pulse this week, but meet the defending champions another two times in a short space of time.

“We beat them in pre-season but quite a bit has change since then – they’ve been a team on the rise, but so have we and the big things for us now is building on that lead once we get it.  We can’t take our foot off,” she said.

“The good thing is we get to meet them a few times in the next few weeks so we can have a look and adjust where we need to.”

Burger is expecting the messages from her former team-mates to continue in the build-up to the Round 8 game.

“There’s already been constant banter this year but I’m expecting there to be a bit more this week,” she said with a laugh.

The Tactix gained a valuable bonus point in the loss to the Stars but have slipped to fifth spot on the ANZ Premiership ladder – just one point separates them from both the Pulse and Steel who are both on 12 points.

“It is a big game, but every game really counts from here on in,” Burger said.